The picture prefect days for prior XFL Renegades football events this year in North Texas finally gave way to cloudy skies with very light sprinkling here and again at first. But usually, one good thing about Spring Football in Texas (technically late winter but hey) is that it was still mid-sixties to start the game. Not really affecting the players or the over 17,000 fans in attendance.

Both Dallas and St. Louis looked sharp in their full uniforms while walking the perimeter of the field during pregame warmups. It was quite a far cry from the Dallas Summer Showcase look; the t-shirt tryouts that kickstarted XFL football in the DFW area just little bit down the road in UTA this past June. Much more polished, colorful and of course ready for TV.

ESPN's Pat McAfee, was mulling around the Dallas bench getting ready for the new gig once the broadcast started. Oliver Luck, XFL CEO and Commissioner also made the trek to watch his league's opening weekend and would join the sidelines shortly thereafter.

The game presentation started off with the National Anthem and a perfectly timed flyover from one of our great military helicopters. It may not have been a fighter jet but the cool thing about a helicopter is it seems its safety parameter for the height at which it must fly over the general public is a bit lower. Thus, you could almost feel it thumping way in advance and then crest at what seemed like just over the top of the stadium seats.

The game kickoffs have turned out pretty well for the XFL, with almost all being returned and the fans were looking forward and cheering as it went off. But this time it did go 8 yards deep and was downed so, Dallas started at the 35. They made a couple first downs with almost all passing but then ended the drive in a punt. St. Louis didn't have much more the first drive and ended their first drive with a punt as well.

The first big catch of the game was to the Battlehawks’ Russell for 28 yards. Then on the same drive Ta’amu had an 18-yard scramble. The drive ended with a fumble and Dallas took over right before the end of the first, score all zeros.

Renegades had a decent drive where they had to convert a 4th down and then later get a field goal out of the drive. Later in the quarter St. Louis scores on a pitch right before half from K. Ford. St. Louis went for 2 and failed on a diving fade route.

With only 1:20 left in half Nelson hit five passes, three of them to tight end Parham. The quick drive did net the Renegades a 42 yd FG. They went into half tied, 6 - 6. 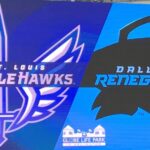 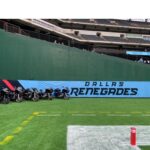 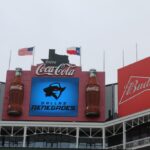 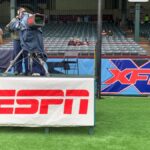 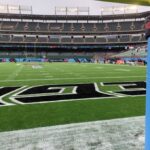 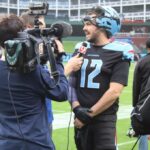 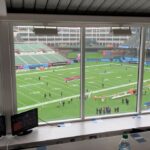 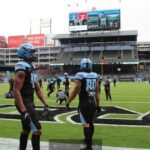 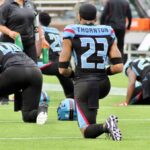 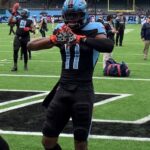 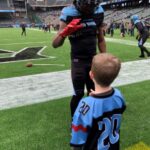 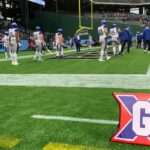 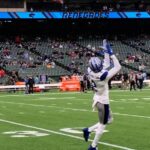 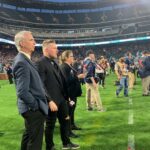 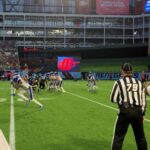 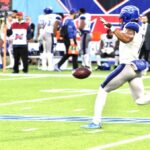 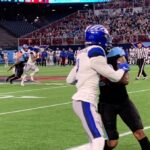 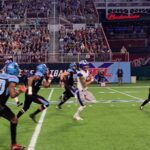 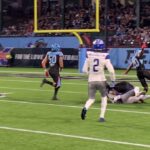 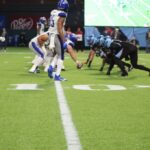 After another stalled drive right after halftime a bright spot was Battlehawks’ punter Marquette King, booting a punt nearly 70 yards in the air, from his 10 pushing the Dallas returner back to the 20 on a run. This would not be the only notable punt.

Dallas then went from their 35 to the St. Louis 4 with the last good play being a swing pass to Dunbar. But they got stuck there and settled for a field goal to take the lead, 6 to 9. St. Louis then drove short ways leading to the aforementioned notable punt.

King, again hit a booter from his 27 bouncing perfectly to stop just short of the Dallas one, over 60 net yards. Then an unfortunate Battlehawk comes in like a laser, either to down the ball which wasn’t moving anymore, or to recover a possible ball he thought touched a Renegade. Anyway, the result was a perfect punt stopping less than a yard short of the goal line to it being downed and put on the 35. It turned out not to mean much as Dallas punted again in short order.

The quarter ended 6 to 9, then finally just after the fourth quarter started, we got our first touchdown from St. Louis with a 9-ard TD pass to Russell. They went for one and missed, making the game 12 to 9.
The next drive Dallas had a 3rd and 11, and Nelson had a streaking Jazz Ferguson on a deep seam route on the left. But Ferguson, didn’t appear to expect the ball so quickly and turned too late to miss a good 25- yard pass in the air that may have went 25 more after the catch for the whole 50.

On the next drive St. Louis had a 41-yard reception to get into Renegades territory. Renegades had a good sack on the drive, but it still ended up being enough to tack on another field goal, making it 15 – 9. The teams then had a couple non-notable drives. Dallas’ DT Robinson got a nice sack on the Battlehawks’ last drive. It was enough to stop more scoring, but the win was in hand for St. Louis with under minute left.

Dallas got the ball left with 33 seconds left, but it ended quickly with an interception on the third play. The St. Louis Battlehawks defeated the Dallas Renegades in the XFL inaugural weekend.

Nelson finished 33 of 42 for 209 yards and Ta’amu was 20 of 27 for 209 as well. The Battlehawks also had the leading rusher with Jones going for 85 on 21 carries. Dallas’ Dunbar led the Renegades with 27 on 5 carries. Dallas leaning heavily on the pass calling 43 of them to only 12 runs. St Louis was more the opposite calling 42 runs to only 27 passes.

This might have been a pretty big upset on paper with Dallas picked nine and half over, but after the first weekend, in the first year of a new league the pecking order may change quite a bit this week. And as for the first weekend of the second coming of XFL, these games seemed to be a huge success and us fans can’t wait for the next one.

⦁ Renegades QB Nelson went 33 of 42, both numbers the best in the league this week

⦁ Battlehawks’ QB Jordan Ta’amu had the longest run from scrimmage of any runner, 37-yards